In the summer of 2019, Musah opted against signing a new contract at Arsenal in preference for a fresh start on Spanish soil.

Considering that he is now a regular with Valencia and the USA national team, even before his 20th birthday, it’s fair to say the New York-born Musah probably made the right call. At least, for his own development.

The tenacious midfielder could be a key figure for the USMNT at the Qatar World Cup. Impress, and interest from across Europe is almost certain to be on the rise, with Musah’s agent already admitting that Barcelona have come calling.

FORMER ARSENAL STARLET YUNUS MUSAH ON BARCELONA’S RADAR
“Valencia intend to block (his sale). And I don’t think they will sell him for less than 30 or 40 million next summer,” says Giacomo Guidolin. “They will still try to hold on to him. But, faced with certain figures, it’s difficult to refuse.
“Last summer, Barcelona carried out a survey. But the discussion did not develop. I see Serie A and the Premier League having an advantage for his future.”

“To leave Valencia he needs an important project. He has to go and play the Champions League and European competitions continuously.”

Musah, versatile and energetic, has been likened to Paul Pogba by former England youth coach Steve Cooper, due to his intriguing blend of guile and power. Musah, who played for the Three Lions until U18 level, recently commuted his future to the USA. He could feature against Gareth Southgate’s men in the Qatar World Cup.

“Valencia rejected a 25 million euro offer from the Premier League in the summer,” Guidolin adds. “Now, Yunus is playing in the starting line-up. He’s going to the World Cup and he himself knows it can be an important stage. Many big clubs follow him, especially in Serie A, where practically all the big names are interested.

“Juventus wanted to sign him before Valencia. The sporting director was (Fabio) Paratici. The Bianconeri were unable to snatch him from Arsenal.”

GUIMARAES EXPLAINS WHY NEWCASTLE SHOULD NOT SIGN MESSI AND RONALDO 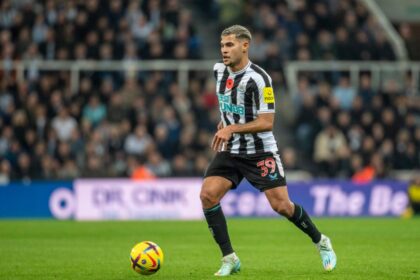 GUIMARAES EXPLAINS WHY NEWCASTLE SHOULD NOT SIGN MESSI AND RONALDO